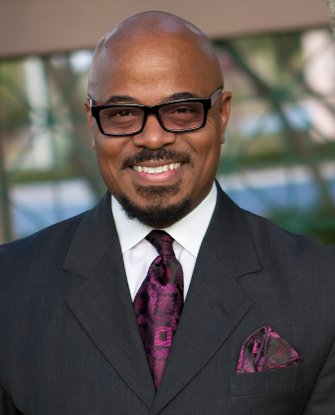 Rev. Donald Clay began his journey in the ministry at the age of 15 years old as he accepted his calling. At that time he was a member of the Tree of Life Missionary Baptist Church, in Los Angeles, CA where the late Rev. Billy James Ray served as pastor. While there he led the creation Evangelism Department, sang and toured with the Voices of Watts choir, under the direction of the late Rev. Robert Henry. In 1980 he was licensed and in 1984 he was ordained. He also attended Wiley College in Marshall, Texas after receiving a scholarship in music and ministry.

In 1988 he organized and pastored the New Beginning Missionary Baptist Church in Los Angeles where he served in the Watts area of nearly thirteen years. In 2001 Pastor Clay relocated to Las Vegas, Nevada and organized the New Vision Full Gospel Baptist Church. In 2013, Pastor Clay and Pastor Jerry Jimerson and the Shakinah Glory Church merged their ministry effort to form the Koinonia (Koy no nee ah) Christian Church. In 2017, Pastor Clay launched DR Clay ministries.

An effective communicator of God’s Word, Pastor Clay is widely known for his practical and dynamic teaching style which helps people apply the timeless truths of Scripture to their everyday lives. He continues to preach, teach, sings and play various musical instruments all for promoting the work of the ministry and to the glory and praise of God.

In 2016, God blessed him with the greatest gift he could receive in the person of his wife Trudy Clay. Her passion, zeal and creativity for God are tremendous assets to the body of Christ at large. God has given them eight beautiful and uniquely gifted adult children and six grandchildren.